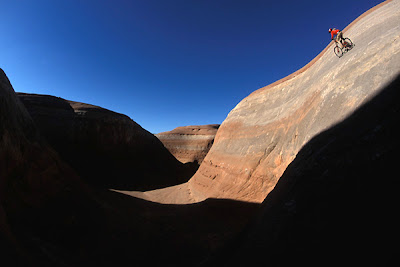 This article was originally published in the Summer 2005 issue of my Newsletter.

A few months ago I photographed some good friends, Ryon Reed and Nate McKay doing some extreme mountain biking (aka Freeriding)at a brand new secret location near Moab, Utah named Canfield Canyon. Having photographed these guys before I knew it was going to be extremely dangerous, not for myself but for the riders. When we got to the canyon, which was basically a set of sandstone bowls dropping into one another Nate gave me the scoop on what he had done and what he wanted to do that day. As I usually do, I encouraged the riders to start off casual and I gave them the lecture “don’t do anything you aren’t sure you can do.” After some casual warm ups, or at least what the riders would call casual – 20 foot jumps off the lip of one of the bowls they moved onto jumping off another drop – this time the lip of a 25 to 30 foot overhanging cave. All of this went off without a hitch and without too much fanfare.

But the piece de resistance was an 80 foot near vertical wall ride Nate had done only a few times before (see photo on the contents page). When Nate told us what he was going to do Ryon and I stood there silent with our mouths agape. I had never seen or heard of anything like this or on this scale before. The upper part of the wall was at least 80 degrees, just off vertical and it also had an overhanging cave in the middle of the wall so that if something went wrong Nate would free fall from 80 feet at the top of his arc onto sandstone rock! On his first go Nate hit the line perfectly and it was unbelievable. By the time he dropped into the lower bowl he was going in excess of 80 mph. He thought it was so fun he did it three more times for the camera (so I could get different angles) and on the last ride he almost stalled over the cave – so we called it quits.

On the way out, Nate told us about another drop he had been looking at and we went over to check it out. I looked over the edge and the rock climber in me took over. I was looking down an 80 foot sheer vertical rock face. The bottom was a smooth transition but that wasnʼt what alarmed me. A small ledge halfway down was the only break in the cliff. I tried to talk Nate out of doing it. If he hit the ledge he would go headfirst all the way to the bottom but he was sure he could do it. At that point I told Nate I wouldnʼt photograph it even if he did do it and that I was going to hike out. I didnʼt want to watch someone die. He was still adamant that he was going to drop in and got on his bike. Luckily, Ryon, an EMT talked him into waiting
until he could get down there on another day and Nate took his advice. I was very much relieved. But I would not be surprised if he has since dropped that line. I still would not want to see it.

This article is an excerpt from the Michael Clark Photography Newsletter which is available through my website. To check out back issues of the newsletter cick here.