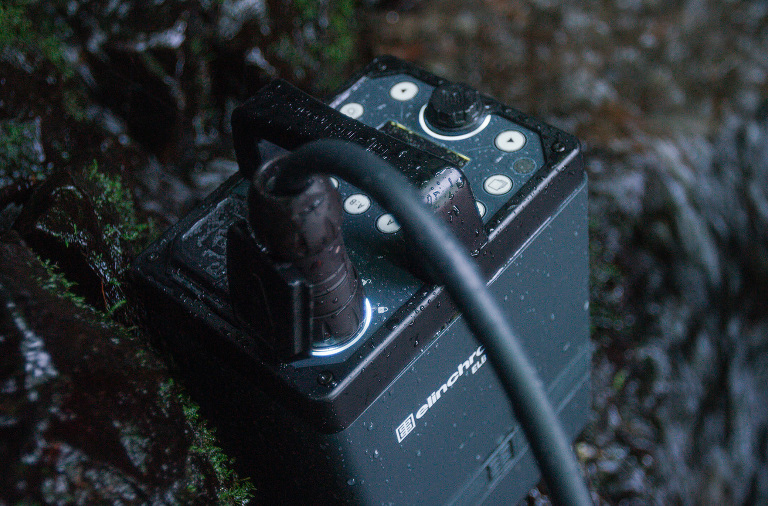 Disclaimer: I am sponsored by Elinchrom and work closely with them on some products. I have been testing iterations of the ELB 1200 over the last year and have spent several months working with this kit. Since the Elinchrom ELB 1200 is still yet to be released, this is a preliminary review. I will save the full review for when I get the full production version of this strobe. The versions I have worked with over the last few months are very near to the full production version, which is why I felt confident enough to write up a preliminary review here. This article was originally published in my Summer 2017 Newsletter.

The Elinchrom ELB 1200 is Elinchrom’s brand new, yet to be released, 1,200 Watt-second (Ws) battery-powered strobe. Over the past two years I have had the honor of testing out a few different iterations of this incredible strobe kit. All of the ELB 1200s I have worked with have been prototypes, though in the last few months I have been working with a very-near-production version of the ELB 1200 for the Lighting the Spirit assignment for Elinchrom and Red Bull Photography. As I haven’t worked with a full production version of this strobe, I won’t get critical here about any aspect of the kit as some things might have changed in the full production version.

I know many photographers have been waiting for this strobe for a long time and are desperate for any information they can get about it. I have been using the Elinchrom Rangers for over a decade now and they have served me well, but after using the ELB 1200 it is hard to even pull my Rangers out of the bag. The ELB 1200 weighs in at 4.3 Kg (roughly 9.5 lbs), which is about half the weight of the old Rangers. The flash heads weigh 2.2 Kg (4.6 lbs). That makes for a 6.5 Kg (14.3 lbs) kit, with one flash head, which means the ELB 1200 is now the lightest 1,200 Ws battery-powered strobe on the market. 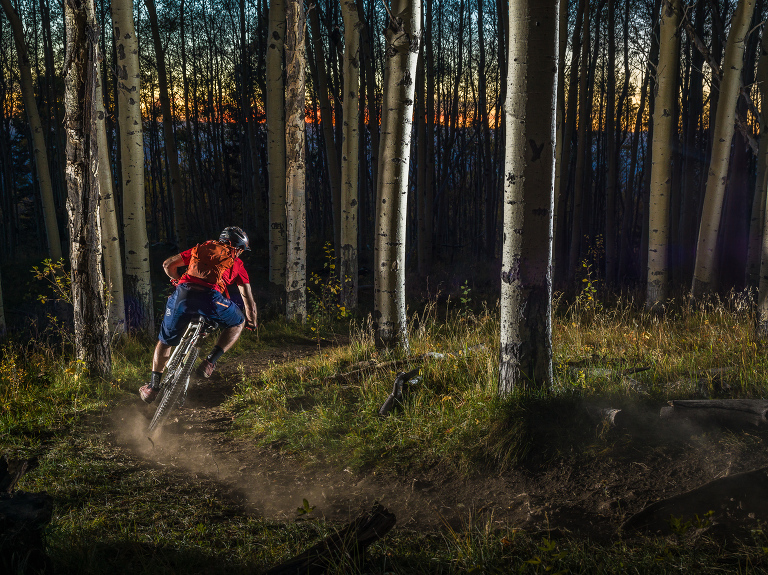 Caption: Above is an image of Chris Sheehan mountain biking under golden aspens on the Alamos Vista trail in the Sangre de Cristo mountains above Santa Fe, New Mexico. To create this image I used one Elinchrom ELB 1200 and one ELB 400. Both had the Action flash heads on them and were set up as a light trap, meaning the lights were pointed at each other and I waited until Chris was in just the right spot to trigger my Hasselblad H5D 50c WiFi camera.

Aside from being so light, the ELB 1200 is also tough as nails, and damn-near waterproof from my testing. For two months this summer, I worked these units over the coals. I have tortured them in a myriad of ways with water, dust, and sand. We even dropped them a few times accidentally. Elinchrom was aware that my crew and I were going to be hard on them intentionally to see how they held up. This was one of the final stages of the prototype testing to see just how tough they are. I was surprised at how well they held up—in fact I am surprised a few of them are still working at all. I figure in two months time, I put at least a year’s worth of wear and tear on the three ELB 1200 units Elinchrom sent me. They were scratched up, beat up, and well broken in when I returned them a few weeks ago. In fact, my old Rangers after a decade or more of hard use don’t look as beat up as these ELB 1200s did after two months of hard abuse. We even put the ELB 1200 into a running waterfall (as shown in the image at the top of this blog post), and even with a flash head plugged in, the ELB 1200 wasn’t phased by any amount of water we poured over it. From what I can tell, the only way to kill one of these pack would be to violently drop it or submerge it in water.

Aside from the lightweight nature of the ELB 1200 and the build quality, the pack overall is very easy to use and houses some of the most advanced technology of any battery-powered strobe on the market. I love that Elinchrom still offers multiple flash head options for the ELB 1200, including the Action head, the Pro head, and the HS (Hi-Sync) flash head. For me, the Action and the HS flash heads are the main ones I use for my work. If I am shooting at or below the flash sync speeds of my cameras, I am using the Action flash head. If I need to work at shutter speeds above the flash sync of my camera I use the HS flash head. This ability to use different flash heads with different flash durations is what, in my mind at least, makes the ELB 1200 the most versatile flash on the market. With the HS flash heads, I found I could overpower daylight from 60-feet (18 meters) away, which is incredible. 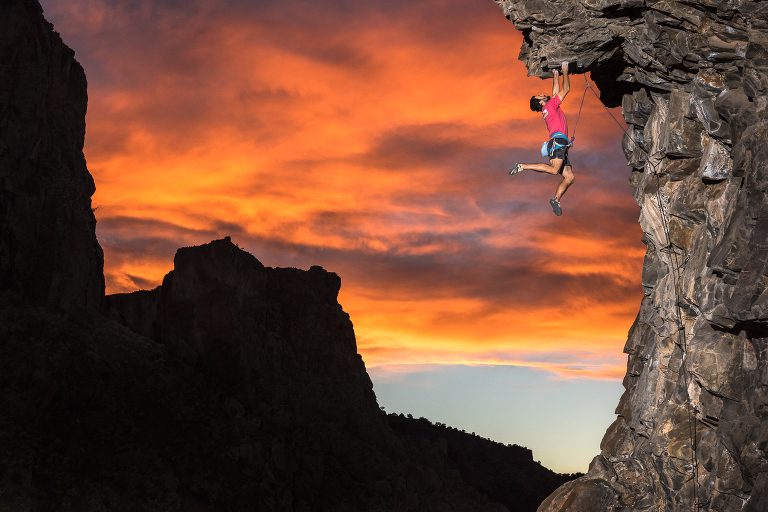 Caption: Above is a shot of Aaron Miller fighting to stay on a tough 5.12c at Diablo Canyon just outside of Santa Fe, New Mexico. This image was created using one ELB 1200 pack and the HS flash head. The flash head was around sixty feet away from the climber and shows just how powerful the Hi-Sync technology is for lighting a far away subject.

The ELB 1200 has two different batteries available. The standard “Battery Air” that comes with the ELB 1200 gets 215 full power pops. The larger “Battery HD” allows for  400 full power flashes. Sadly, the larger capacity HD battery is over the limit (in terms of the amount of Lithium contained in the battery) for checked baggage so you will not be able to fly with that battery. But for local shoots or ones where you don’t have to fly, having the extra capacity is a huge benefit, especially since it is only 0.9 lbs (0.4 Kg) heavier than the Air battery.

The way the battery attaches to the ELB 1200 is also quite innovative. To detach it you simply slide the two Elinchrom logos down to the open position and then pull the two adjacent pieces apart to release the battery. Attaching a battery is as simple as setting the pack over the battery and pushing down. It snaps into place easily and to lock it you move those same Elinchrom logo pieces upwards into the locked position.

In terms of performance and light quality, the ELB 1200 is on par with any other battery-powered strobe I have seen. Like the ELB 400, the Hi-Sync technology, when using the HS flash head, has been refined to a level that no other strobe manufacturer can match. With the HS flash head, you can use any power setting on the pack. This means that can literally choose any camera settings and adjust the power on the pack to get the right exposure if your subject is relatively close—as when shooting portraits. I cannot understate how important this is when shooting in Hi-Sync mode. Additionally, I have seen very little if any gradation when shooting in HS mode. 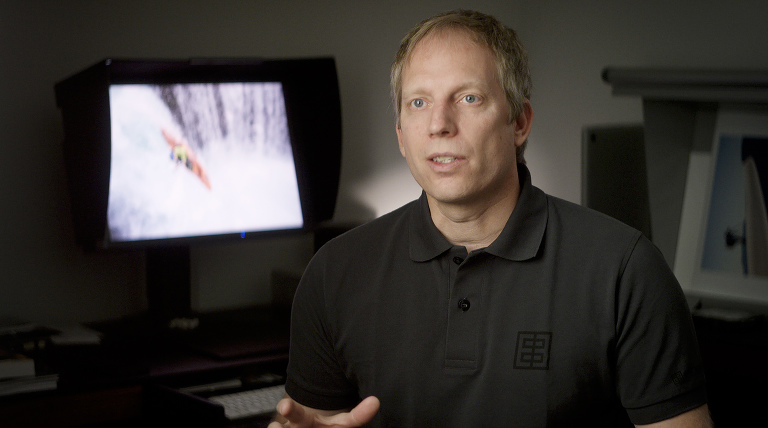 Caption: The 250 Watt daylight balanced LED modeling light built into all of the ELB 1200 flash heads is an incredible constant light source for video applications. We were pretty shocked at how bright it was at full power, and because it is fully dimmable the lighting can be adjusted as need on the fly.

As shown above, the ELB 1200 is also a revelation for video lighting. The 250 Watt LED modeling lamp will stay on for up to two hours depending on the battery used. Because the modeling lamp generates no heat we were able to use any and all of the Elinchrom light modifiers while recording interviews. The modeling lamp is also dimmable and daylight-balanced. It allowed us to get the best lighting I have ever seen while recording interviews. Bill Stengel, the cinematographer that I work with fairly often, was amazed at how great the LED modeling lamp worked for the interviews in our behind the scenes video. We were also both amazed at how bright the LED was at full power. In fact, even with the Elinchrom Deep Octa softbox on the flash head, with diffusion, we had to dim the LED for the interview we recorded in my office. That LED is a major benefit. I don’t see the need to bring along 1×1 LED lighting for video work anymore. And with the Elinchrom modifiers, the light quality of that built-in LED in the ELB 1200 flash heads is better than any 1×1 LED panel I have ever seen.

The OLED display panel on the top of the pack is both simple and intuitive, but it also has deep menus allowing one to customize the pack to their needs. When the Action or Pro flash heads are attached to the pack, the OLED shows the exact flash duration for each power setting, which is quite handy. When the HS flash head is attached the flash duration is not shown because it is a consistent 1/550th second flash duration at all power settings. As usual with Elinchrom strobes, the power settings are changeable in one-tenth f-stops allowing you to dial in the lighting extremely accurately.

Elinchrom has listened to their photographers very closely in the last few years. When the ELB 400 came out three years ago, they sought input from the photographers who work with them closely. I sent them three pages of notes on what I would like to see in the new updated Ranger kit—and the ELB 1200 incorporates about 90% of that feedback. Apparently quite a few of us had similar feedback and requests. I have never seen a company take in so much feedback and put so much of it into a product. Kudos to Elinchrom for all of their hard work on this product. It has been a long wait but I think those that upgrade to the ELB 1200 will find it above and beyond their expectations. And with the $1,000 USD trade-in offer that Elinchrom has announced, there is little to complain about when considering upgrading from the older Rangers to the new ELB 1200. I will be trading in my old Rangers as soon as possible for the ELB 1200.

Of note for those who currently own the Elinchrom Ranger packs: the ELB 1200 is very similar in size, so it should fit into the same bags you currently own. This was a big deal, and something I specifically asked for when Elinchrom first sought out feedback as I have a small fortune in Lightware and Pelican cases to carry my Rangers.

For the location photographer needing a tough, lightweight, and versatile 1,200 Ws battery-powered pack, the ELB 1200 is a top-notch offering. If you are looking to push the envelope of what is possible, especially with Elinchrom Hi-Sync technology, then look no further. This is the strobe kit we have all been waiting for. As you can see in this blog post, and in my Summer 2017 Newsletter, I have literally built an entirely new portfolio of images while testing out this new strobe kit. No matter what I say here in this review, I think the images speak for themselves.

The ELB 1200s will start shipping this month. The ELB 1200 is hands-down the most advanced 1,200 Ws battery-powered strobe I have worked with. It is ultra-dependable, insanely durable, super easy to use and the Hi-Sync functionality is unsurpassed by any other strobe on the market. In short, the ELB 1200 blows the doors off my old Rangers. My thanks to Elinchrom for allowing me to be a part of the testing process and for designing such a stellar product. For more info on the ELB 1200 check out the Elinchrom website. To see how I have put the ELB 1200 to use, check out the Lighting the Spirit blog post.