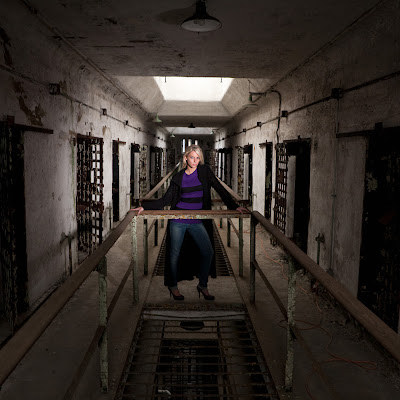 I just got back from teaching a stellar lighting workshop in Philadelphia with David Tejada for the Mentor Series Workshops, sponsored by Nikon. While it was only a three day workshop most everyone felt like they had been there a week or more by the second day. We stuffed in an incredible amount of information on lighting and even digital workflow. And I have to say the participants images were absolutely incredible. I was very impressed by the caliber of photography.

Above is an image I snapped at the very end of the day with one of the participants cameras just to give you an idea of what we were working on. This image of model Lisa Versagli, was shot at the Eastern State Penitentiary in Philadelphia, where Al Capone was once incarcerated. The prison is a ruin that is being preserved. It was originally built in 1827 and opened in 1829. Hence, it is one of the oldest prisons in the United States. It was also used as a location for the film 12 Monkeys and more recently, Law Abiding Citizen.

My thanks to Michelle Cast and PopPhoto for bringing me out. I look forward to teaching with the Mentor Series again here soon at some point.