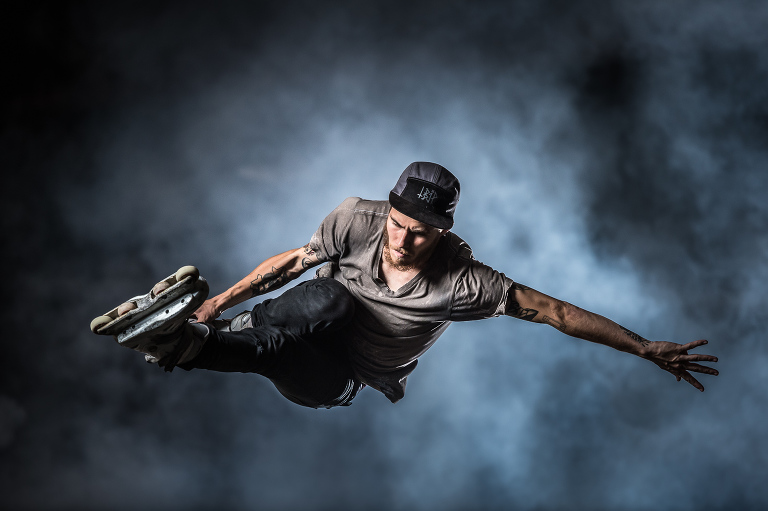 Since the introduction of the Elinchrom Skyport Plus HS transceiver, and the new Hi-Sync capabilities of that transceiver, there has been a massive amount of confusion as to how this technology works even though Elinchrom and myself have put out a lot of in-depth information on the topic. As the photographer that shot some of the promo images for the new Skyport Plus HS, I am getting quite a few emails asking which flash heads to buy, how the Hi-Sync works and any number of other questions related to the latest Elinchrom strobes. Here in this blog post, my aim is to clear up some of that confusion and explain why you would want one setup or another in terms of the various flash heads offered for the ELB400 and the higher-powered Ranger RX Speed AS units. 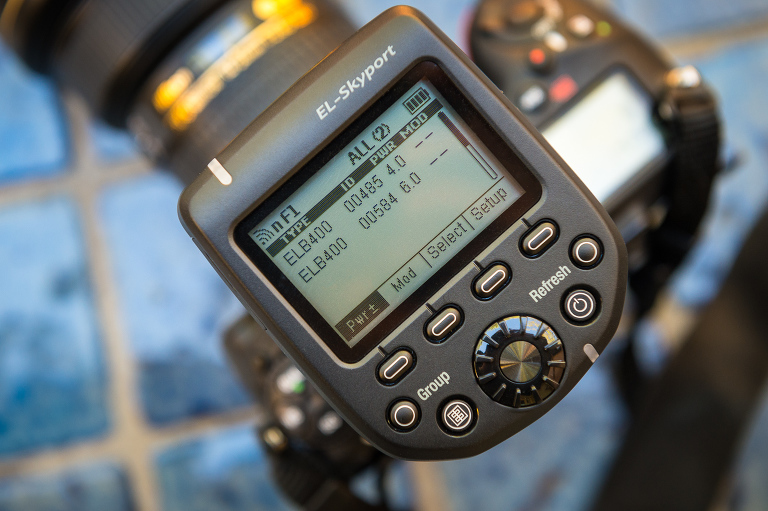 Before we get started, I implore you to read the blog posts I have already written for Elinchrom and which appear on their website:

The Hi-Sync Experience: This blog post introduces the Elinchrom Skyport Plus HS and gives an overview of it’s capabilities.

HS or HSS: What’s the Difference?: This blog post goes into great detail to explain how High Speed Sync, Hypersync and Hi-Sync work and how they differ. Reading this article will help you understand why and how we decide which flash head to use and for which situation each would be best. Also, the diagrams in this blog post, created by Bram Dauw at Elinchrom, are incredible and really drive home just how each of these high speed flash systems work.

Now, getting down to it here. Basically, Hypersync and Hi-Sync are the same thing, but since PocketWizard has Trademarked the name “HyperSync” Elinchrom had to come up with a different name, which is Hi-Sync or HS for short. In theory they work exactly the same way. In reality, Hi-Sync works much better than Hypersync ever did or could because Elinchrom has dialed in their products to work together for the best possible results. If you want to shoot at higher shutter speeds than your camera normally syncs, like 1/1,000th second and above, then you will want to get the Elinchrom Skyport Plus HS transmitter along with the ELB400 and the new HS flash heads.

In the image below. I am showing an example of this type of image, where the shutter speed was set to 1/20th second and the aperture was set to f/5.6. The fast flash duration froze the mountain biker at the top of his jump. But, as you can see there is some ambient light bleeding through as well – this is the motion blur of the subject represented by the dark shading in front of him. He is sharp, stopped by the fast flash duration, but his shadow was tracked by the longer 1/20th second shutter speed. When shooting this type of image the motion blur is always going to be there no matter how fast your flash duration. Whether or not the motion blur is in front or behind the subject is a matter of how the flash was sync’d, either using front curtain sync (standard sync) or rear curtain sync (a.k.a. 2nd Curtain Sync for Canon shooters). 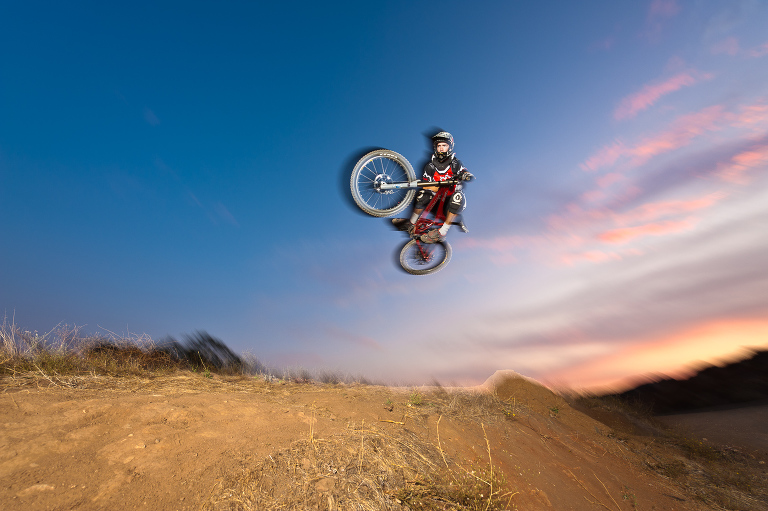 Note that if you used a flash head with a slow flash duration, like the Pro head, which has a flash duration of 1/1,200th second at full power, then the cyclist would not be sharp because the flash duration was not fast enough too stop his motion.

The Pro head can be used in Hi-Sync mode but there will be quite a bit more gradation in the image than with the HS heads discussed below. If you don’t shoot action but want a flash head that can technically work with Hi-Sync and also create nice sharp portraits then the Pro head is an option. But, honestly, if you are investing the money in this system, I would suggest buying the Action head and the HS head so that you have the best of both worlds and can choose the best flash head for the scenario.

The HS flash head has a very slow flash duration and allows for the best possible Hi-Sync lighting options. At full power on an ELB400, the HS head has a t0.5 flash duration of 1/600th second, which is optimized for the least amount of gradation when shooting in Hi-Sync mode. This flash head is also designed to work at virtually any power setting and still provide very evenly lit Hi-Sync exposures. If you are looking to shot at high shutter speeds using the HS technique, this is the flash head you want. 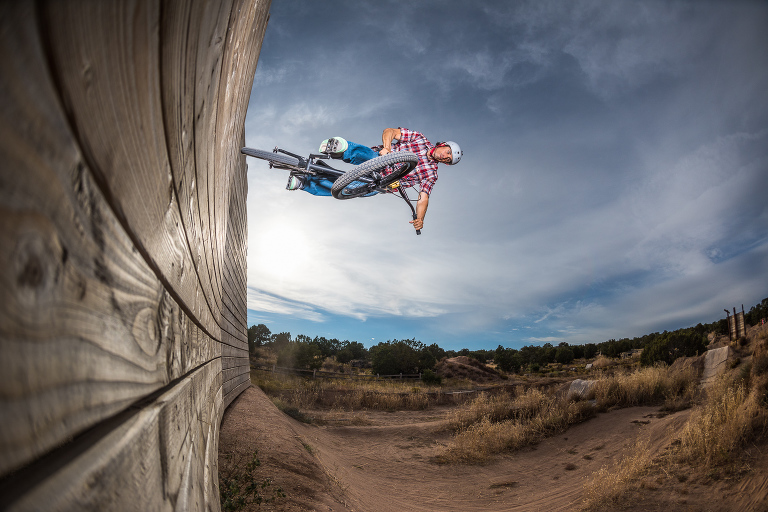 In the image above, I captured this image using the Hi-Sync mode and a shutter speed of 1/6,400th second. Using such a high shutter speed completely froze the subject so there is no motion blur at all. The BMX rider is tack sharp. Contrast this with the mountain biking image above to see how the Hi-Sync (HS) flash head can stop motion fully compared to the Action head.

As you can see, each of the flash heads provide different options. For myself, I find that the Action and the HS heads are the flash heads I use on a regular basis. When shooting with my Hasselblad or shooting with a DSLR at the standard sync speed or below, I use the Action heads. When I want to shoot in Hi-Sync mode to overpower the sun for a portrait or to stop the action completely (and overpower the sun) I reach for the HS heads. There isn’t any other flash system I know of that has this type of versatility.

Side Note: For the Elinchrom Ranger RX Speed AS 1,100 Ws strobe system, I would opt for the S (Standard) heads for shooting with Hi-Sync and the A (Action) heads when shooting with my Hasselblad or when shooting with a DSLR at the standard sync speed or below. With the S head and the Ranger 1,100 Ws strobe, there will be some gradation in the image because the S head has not been optimized for Hi-Sync flash techniques yet. This isn’t that huge of an issue but something to be aware of. Adding a graduated filter to the image in Lightroom can solve this issue very easily and quickly. For now, if you want the best possible Hi-Sync images use the ELB400 and the HS flash head.

Engaging the Hi-Sync (HS) Mode on Nikon and Canon Cameras 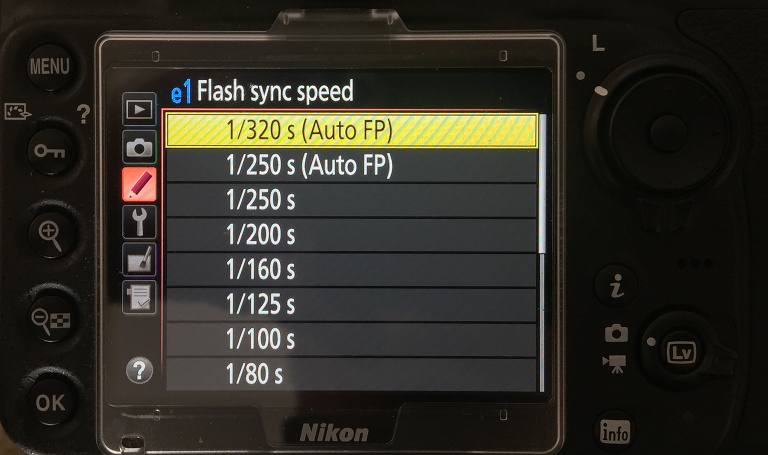 Now that the custom flash mode is set up in the camera,  the HS mode on the transmitter will automatically engage when you raise the shutter speed above 1/250th second. You will see the HS symbol show up in the top of the screen on the Skyport plus HS.

As I don’t work with Canon cameras, I have heard from a few that have tested it out and those photographers have indicated that for the best results the ODS (OverDrive Sync) settings need to be set between 2.0 and 2.5 ms. To adjust the ODS settings, press the button below Setup , then go down to the ODS Setup menu and use the scroll wheel to adjust the ODS setting to 2.5. Note that you may want to test various ODS settings with your Canon camera because each camera is a little different.

With Nikon cameras, I have found that no ODS adjustments are necessary.

That is it for setting up the Hi-Sync capabilities of the Skyport Plus HS transmitter. To get an accurate exposure with the flash I recommend that you calibrate your LCD screen on the back of your camera (to a calibrated monitor) and use the Histogram to check your exposure.

With the Skyport Plus HS, there is an option to use Speed Mode or the Normal mode of the transmitter. This might be confusing, but here at the basics:

Normal Mode: In Normal Mode the backlit screen is glowing green. Use this mode when shooting at normal flash sync speeds or when shooting in HS mode. See the above section for how to engage the HS mode. The photo of the Skyport Plus HS shown at the top of this blog post is in the Normal mode, with a green backlit display.

Speed Mode: In Speed Mode the backlit screen is glowing red. This mode is designed to be used with leaf shutter lenses offered by Hasselblad or Phase One and allows for shooting up to 1/1,000th second with those camera platforms.

So, to clear up the confusion, most people will always be in the Normal mode. You do not need to be in Speed mode to engage the HS function.

I hope this blog post clears up some of the confusion surrounding Hi-Sync and helps you get rolling with this exciting new flash technique. Hi-Sync opens up a whole new way to shoot with strobes. Essentially, we can now choose any shutter speed and any aperture and get a correctly exposed image by powering the strobe up or down. It is a very exciting time for photography!