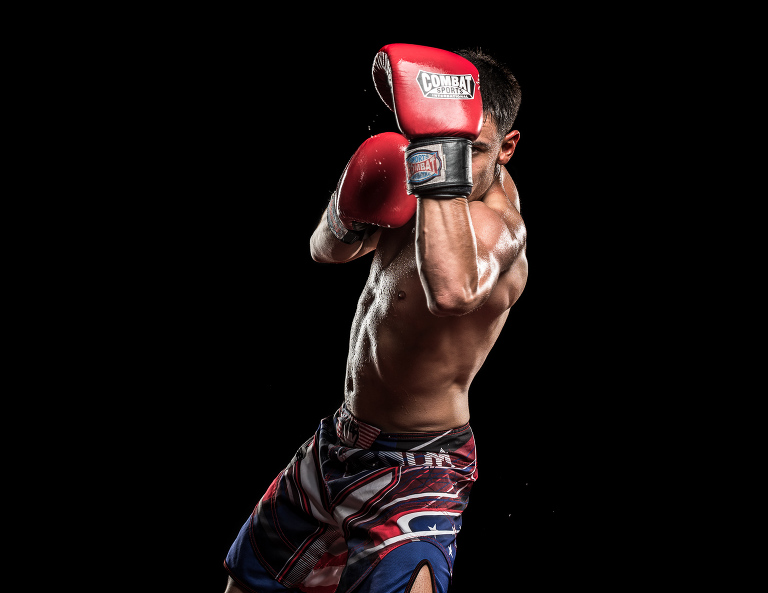 Earlier this year, at the end of the summer, I shot an assignment for Sekonic light meters to show how the Sekonic L-478DR-U-EL light meter works seamlessly with Elinchrom strobes. For this assignment, we chose a studio setting and I worked with a trio of boxers from Undisputed Fitness here in Santa Fe, New Mexico. The boxers, Nate Harris, Luis F. Castillo (pictured above) and Reuben Rivera, are wicked fit and were great to work with on this shoot. As you will see in the images below, we shot some “standard” type portraits and then really got creative with in-camera multiple exposure images. But since the whole point of this shoot was to highlight the Sekonic light meter we were also filming a behind the scenes video to go along with the images.

The main setup used for this shoot can be seen below. This was a pretty standard three light setup with two edge lights in the back separating the boxer from the black background and a large octa softbox filling in from camera right in front of the subject. For the background lights, I used one Elinchrom Indirect Litemotiv Recta on one side and a 30-dgree grid spot on the other side. The big softbox in front was an Elinchrom 120cm Litemotive Octa, which is a gorgeous light modifier. For light, I used a couple of the Elinchrom ELC Pro HD strobes along with an Elinchrom ELB400. All of this was triggered with the Elinchrom Skyport Plus HS transmitter. The reason I am going into such great detail here is to show that the Sekonic light meter talks to both the strobes (all Elinchrom flavors) and also to the Skyport transmitter so that all of them are on the same page. I can take readings with the Light meter, change the power settings on any or all of my strobes, and the strobes and the Skyport will talk to each other and adjust the power settings in sync so that everything is on the same page. 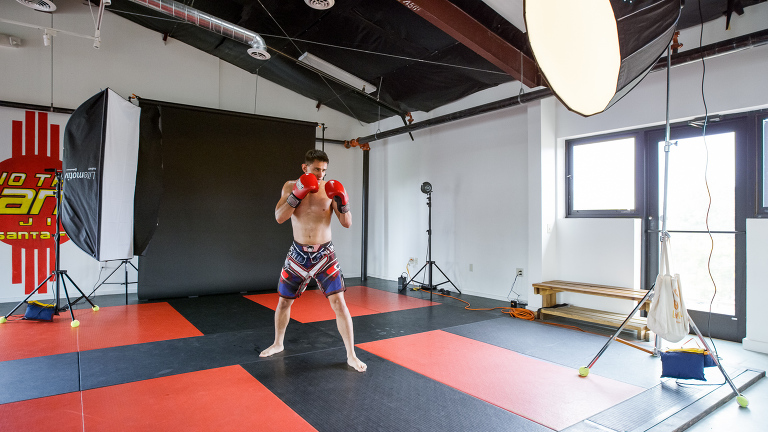 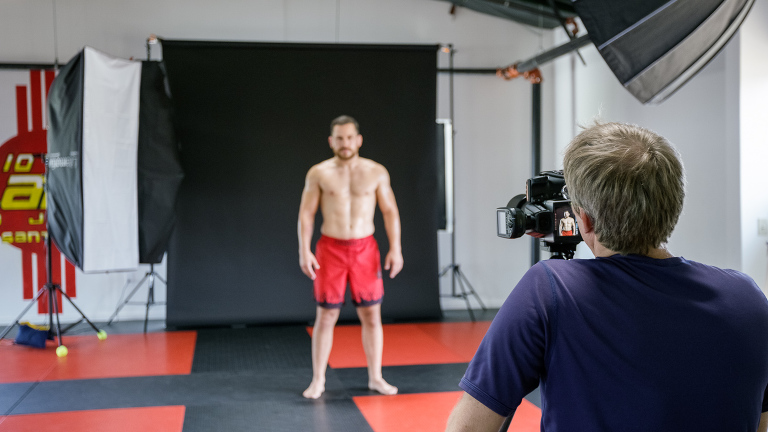 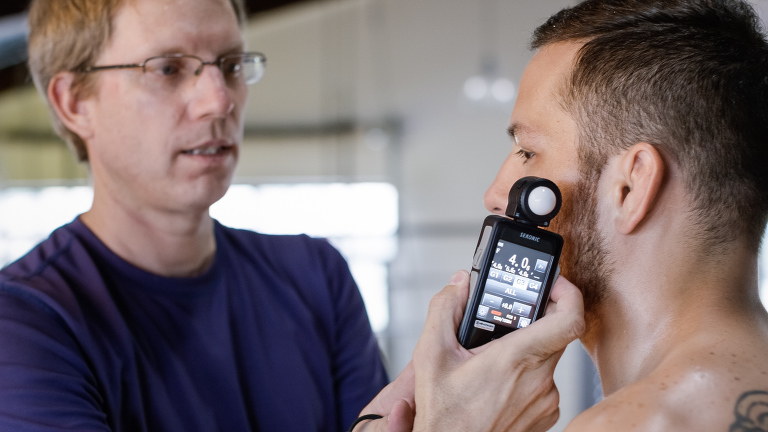 The Sekonic L-478DR-U-EL (that is a mouth full) is an incredibly powerful light meter. In the standard mode it is very easy to use. You simply touch the screen and power your lights up or down and then push the button on the side to take a meter reading. On all of the Elinchrom strobes, it is possible, and fairly easy, to put each of them into individual radio frequency groups. The light meter can handle up to four groups. With the strobes set up this way, you can touch the screen and adjust the power setting of each group individually. Also, the light meter will show you the exact f-stop reading for each group so you can build your lighting set up quickly and efficiently–all the while knowing the exact lighting ratios between all of the groups. As you can see in the image above, I had the three strobes set up in three groups and dialed in the back lights so that they has the same power output. In this example, the rim lights (Back lights) were approximately a half stop brighter than the front fill light.

Once we got everything set up and dialed in, we concentrated on the images. Initially, I focused on portraits like the one shown below of Reuben Rivera, and shot those with the Hasselblad H5D 50c WiFi. I did shoot some action with the Hasselblad as well, like the top image in this blog post, but then switched to the Nikon D810 when the action started heating up – and for the multiple exposure capabilities built into that camera. 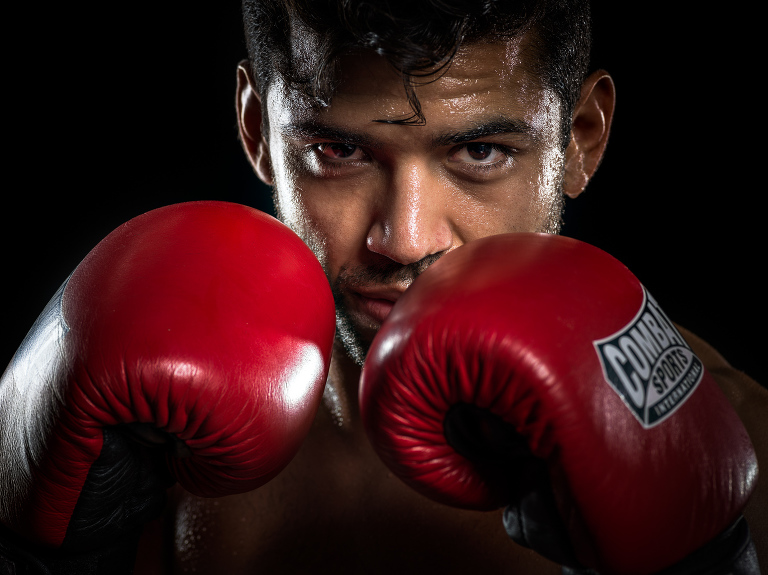 I always use a light meter when I work with strobes. I just don’t get why you would not use a light meter. They aren’t that expensive when compared to the camera and lighting equipment. And with a light meter right off the bat you get a perfect exposure with no guess work. Of course, the light meter reading is only a starting point depending on what look you are going for. But, when I am on a set with an art director, the athletes and other crew, and sometimes the client themselves, the last thing I want to do is have to take five to ten shots where I am guessing at the exposure to figure out my camera settings. I look a lot more professional using a light meter and nailing it on the first shot is just a hell of a lot easier than guessing. Plus using a light meter allows me to dial in the lighting to the aperture I want to use straight away without any guess work.

Before the shoot, I came up with the concept of doing a series of multiple exposure images and then piecing the various multi-exposure images together in Photoshop. Once we got rolling on that series of images, we really started to hit the mark. The boxers seemed pretty stoked on the images and I worked with each of them to create a variety of multiple exposure images. I also have to say the in-camera multiple exposure mode of the Nikon D810 (and it is the same on most pro Nikons) is pretty incredible. There is very little post-production on these images. I only did a little tone mapping and darkened the black background slightly to get the images you see here.

I am not sure myself which of the above composites (of two multi-exposure sequences) is my favorite. If you have an opinion please let me know your thoughts in the comments below. My gut leans towards the top one or the bottom one. I have to say that all of them look pretty cool. I was trying to convey the bobbing and punching movement of a boxer in a still image.

In the end, we got some great images and we really showed just how powerful it is to have a stellar light meter to work with. If you use Elinchrom strobes and are looking for the best possible light meter to use with your strobes, look no further. The Sekonic L-478DR-U-EL is an amazing light meter with a very deep set of functionality and a super cool touch screen. And until December 30th, you can get $50 off and free shipping through Mac Group. My thanks to Sekonic and Mac Group (the USA distributor for Sekonic and Elinchrom) for this assignment. My thanks also to Bill Stengel for the behind the scenes video footage and of course to Nate, Luis, and Reuben for working so hard to help us create these images.