Over the past year or more, in anticipation of this time–where Nikon, Canon and everyone else would jump on the mirrorless train–I have been testing out and thinking a lot–too much really–about the equipment I use and what the future holds. It has been clear for a while now, at least to me, that mirrorless cameras are the future of photography. There are a number of reasons for this but chief among them is that to take 35mm full-frame sensors beyond 50 megapixels and have the ability to get sharp handheld images the mirror has to be removed. The mirror causes way too much vibration. The mirror also doesn’t allow for In-Body Image Stabilization (IBIS), which is key for getting sharp images at reasonable shutter speeds with super-high resolution sensors. Additionally, the DSLR lenses, at least those in the Nikon and Canon ecosystems, are not able to deal with the higher resolution demands of 50-plus MP sensors–or at least they would not deal with it well. Hence, both Nikon and Canon have created larger lens mounts to allow them to create next-generation higher resolving lenses.

It is only a matter of time until mirrorless cameras mature to where they will be the clear favorite over DSLRs for all genres. For many genres, mirrorless is already a clear favorite. I don’t know that we are there just yet for fast-paced sports photographers like myself, but we aren’t far off. For working professionals, to stay competitive and even improve our photography, pushing the envelope not only with our skills but also with the available technology is tantamount for staying relevant–at least in the adventure spots genre I inhabit. While testing the Nikon Z7 over the last few weeks (stay tuned for my full review), it has got me thinking a lot about how it or any mirrorless camera will be used in tandem with my DSLRs and medium format digital cameras. It has also got me thinking about the giant expense coming soon to replace my entire DSLR kit, that I have built up over decades, with a full-fledged mirrorless kit.

A mirrorless camera changes how you shoot. Because there are both an electronic viewfinder (EVF) and a rear LCD, and both are showing the exact same image, I find that I shoot much more often from the hip than I would with a DSLR. I also find myself fine-tuning the image in-camera more than I would with a DSLR. With a DSLR, I am primarily just trying to record image data with a pleasing composition and a satisfactory exposure. I worry about tweaking the final image in the post-processing. With the mirrorless, I am comparing how the subject looks at a normal exposure–or with an underexposed or overexposed look. I can also see immediately if underexposing the image brings color back into the sky or darkens my subject too much. The live histogram is perhaps the best thing about mirrorless and it is something I have been asking for in DSLRs for more than a decade.

Mirrorless cameras offer some serious advantages in terms of speed and ease of use. The live preview image and histogram in the EVF allow you to dial in the exposure exactly as you want without having to shoot an image and then check the LCD as with a DSLR–and then have to shoot another image with new settings, and check it again and so on. Instead, with a mirrorless camera, you can see how the exposure affects the image in real time by looking through the viewfinder and changing settings to dial in the look and feel of the image exactly as you want. This is referred to as “what you see is what you get” or with the acronym WYSIWYG. This massively speeds up the entire process of getting the exposure just where you want it. Going back to my D850 was tough after getting used to this on the Z7. I can see now why DSLRs would seem quite clunky to those that have only used mirrorless cameras. Also, having a built in loupe, i.e. the EVF, to review images even in bright sunlight is a huge bonus, especially if you are using flash or strobes.

Having a live preview of what the image will look like allows for a more artistic decision making process as to how you want the final image to look–at least before raw processing. I would even say, it gets the image farther towards the final look in camera and in some cases speeds up the post-processing workflow. With the live preview in the EVF providing WYSIWYG, you can see that the image is better dark, or maybe you really want those highlights to blow out. Being able to see and compare the differences in the EVF or on the back LCD live allows for an immediate decision making process that is difficult to duplicate on a DSLR–or at the very least it would take a lot longer to work out on a DSLR.

So far, I can easily say the Nikon Z7 is the best mirrorless camera that I have worked with as far as ergonomics, image quality, EVF and overall build. There might be other mirrorless cameras out there with faster autofocus, like the Sony A9, but none of them that I have worked with have the complete feel I have been looking for until I picked up the Nikon Z7. In any case, this blog post isn’t about any one camera but more generally about mirrorless cameras versus DSLRs, which have been the mainstay for the last fifteen years or more. In my experience, once I start shooting with a mirrorless camera, switching to the DSLR feels slow and clunky–unless I need the wicked fast 3D AF Tracking in the Nikon D850. Once the manufacturers can dial in the AF speed and consistency for fast moving sports I think DSLRs will slowly fade out.

While using the tiny Z7 camera body with the 24-70 f/4 S on a recent assignment, I had a discussion with my video crew about showing up with such a small, lightweight camera on a big assignment where you would be charging the client tens of thousands of dollars. The video crew by the way was lugging around a full Red digital cinema camera with five honking huge cine-prime lenses, which made the comparison that much more relevant. Everyone who passed by us was blown away by the video rig and said nothing of the Z7 because it looks like any other consumer camera to the general public. I realize the final images are all that counts, but on some jobs the size of the camera matters in terms of the client, and the subject, feeling like they are working with a top-end photographer. Hence, this discussion about camera size.

In terms of size, Sony and Fuji seemed to have come out with the smallest and lightest MILC offerings. They dictated the form factor and for years hyped the small, lightweight nature of these cameras. Then reality hit the masses when they realized you can’t bend the laws of physics. If you want an f/2.8 lens on a full-frame camera it will be the same size on a mirrorless as it would be on a DSLR and in most cases it might even be slightly larger to account for the shorter flange distance. Hence, that slightly lighter mirrorless camera body isn’t really that much lighter overall. Further, when you take into account the poor battery life of most mirrorless cameras when compared to equivalent DSLRs, and the need to take a few more extra batteries, that weight savings evaporates very quickly. Now that the weight advantage of mirrorless is well understood as a myth, save for when using f/4 and lighter lenses, if we are going to shoot with f/2.8 and faster lenses, like those announced with the Canon EOS R, what is the point of a small form factor for the camera?

It is nice to have a camera that is smaller for expeditions and when weight is a huge concern–and I am all for that–but for a lot of jobs, having a larger camera that is mirrorless (a.l.a. the Leica SL – but not that heavy) might be nice. A larger mirrorless camera body can have more buttons and dials and better ergonomics, like the D850, and still be a mirrorless camera with all the advantages therein. It would also balance better on the larger f/2.8 lenses and it could have larger batteries to overcome the battery life issue. Interestingly, there are now a variety of mirrorless camera sizes on the market. Sony and Fuji are perhaps the smallest, Nikon is a bit larger, Canon opted for an even slightly larger body and then the Leica SL is perhaps the largest full-frame mirrorless option. I don’t think we have yet figured out what size is the best overall size for mirrorless cameras.

One question I hear from a lot of photographers is why do we need these super high-resolution cameras? For the working pro, it may be that they need the resolution for huge prints, but those making huge prints are pretty rare. The real reason for super high-resolution cameras is due to higher resolution monitors (think Apple 5K Retina Displays) and the strange crop and aspect ratios associated with modern digital advertising. While teaching at a recent photography workshop for Summit Workshops, Scott Wilson, who is the Managing Director at Sandbox Motion, showed us a slide with all the various crops pulled from one still image for a clients online adverting needs–including web banners (both horizontal and vertical), Instagram, Instagram stories, Facebook, website homepage images, and other various crops. As shown below, I have had similar requests from recent clients to crop images for various online uses. When cropping an image so massively, if you aren’t using a fairly high-resolution camera (i.e. 40-plus MP), then the resulting crops have very little resolution, which can come back to bite you if a cropped image is displayed on a high-resolution monitor. The image below is an example of how the image might be cropped to a variety of different sizes and an aspect ratios. This is the new reality of modern advertising photography. 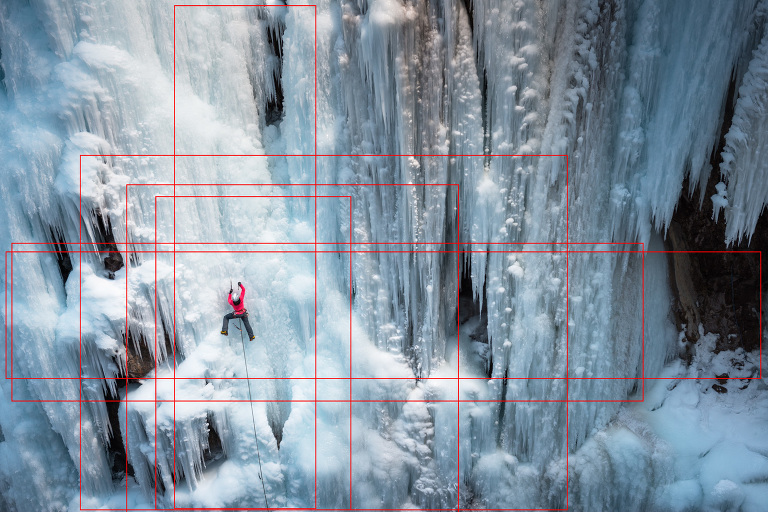 As with any camera system, there are advantages and disadvantages with mirrorless cameras–as it stands right now. Mirrorless has a distinct advantage in terms of the lack of vibration, better optimized lens options, WYSIWYG, live histograms, live focus peaking and a very intuitive interface. The downside, at least for right now, is slightly slower autofocus for those of us trying to capture fast-moving subjects. For pretty much any photographer that doesn’t need the ultimate in autofocus technology mirrorless is there–it is good enough. For the rest of us, it is just another tool in the bag. Regardless, it is a very exciting time to be a photographer.