B.A.S.E. Jumping off the Fisher Towers 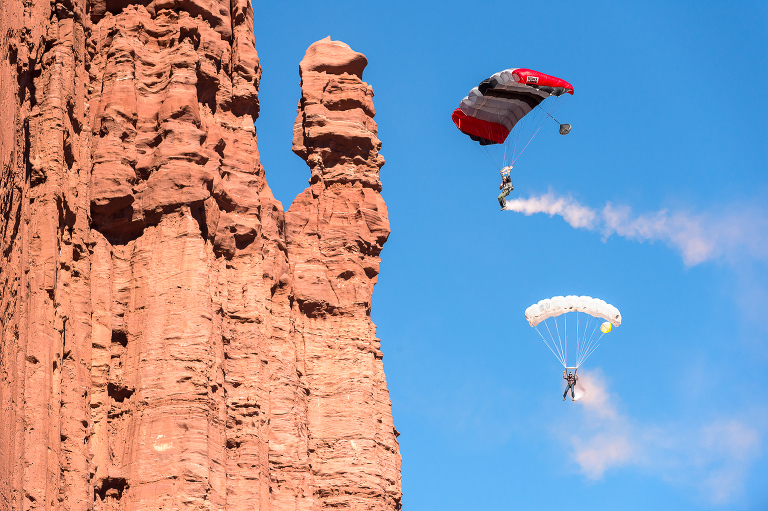 “People ask me if I am crazy. If you aren’t doing what you love then I think you’re crazy!” – Miles Daisher, from the Miles Above Series

Over the last five years, I have had the honor of working quite a bit with the Red Bull Air Force. Last fall, I got the call to work with them again. For this assignment, Miles Daisher and J.T. Holmes were looking to jump off several of the biggest formations in the Fisher Towers near Moab, Utah. The Fisher Towers are giant sandstone pillars that rise up to over 900-feet tall above the canyons below them. These are pillars of mud and for climbers these formations make up some of the scariest climbing anywhere on Earth. Only the extremely brave and most experienced climbers attempt the bigger routes on these towers.

The idea for this shoot was that Miles and JT would be climbing the towers to jump off them. Chris McNamara, a well-known, hard-core Yosemite climber who has also done several routes in the Fisher Towers, was on board to set up the ropes. Andy Lewis, known by his nickname “Sketchy Andy,” also joined the team as he had jumped from the towers before. Over the course of three days the athletes jumped more than half a dozen times each from two separate towers.

As a climber, the Fisher Towers have always been a mystical and beautiful place for me. They are much more majestic than many of the formations in the nearby National Parks. While I was only ascending ropes with mechanical ascenders , a.k.a. “jumars,” and not actually climbing the formations directly, it was still a wild experience to get on top of these famous formations and see Miles, JT and Andy leap off. 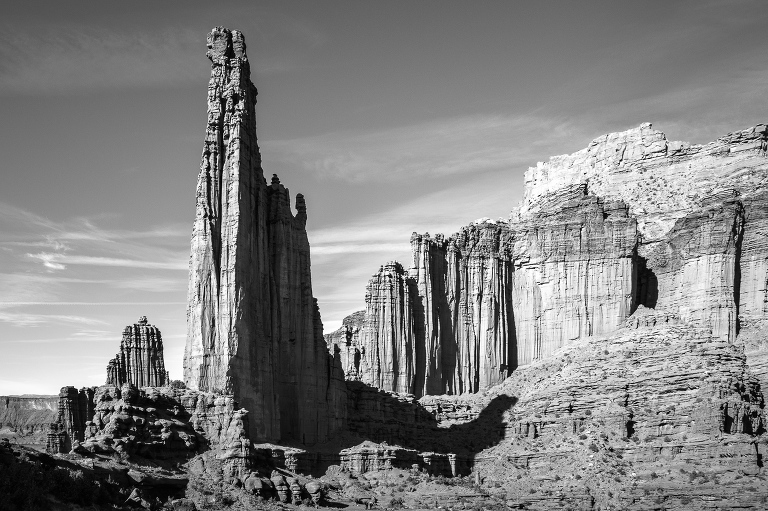 Top Image: Andy Lewis and JT Holmes fly around the Titan while B.A.S.E. jumping in the Fisher Towers. Above: A shot of the Titan, the largest formation in the Fisher Towers, which rises nearly 1,000-feet above the surrounding canyons. To ascend the Titan, we climbed ropes set on the left side of the Tower and rappelled the main route on the right skyline of the tower. Below: JT Holmes, Andy Lewis and Miles Daisher launch from the Kingfisher Tower. 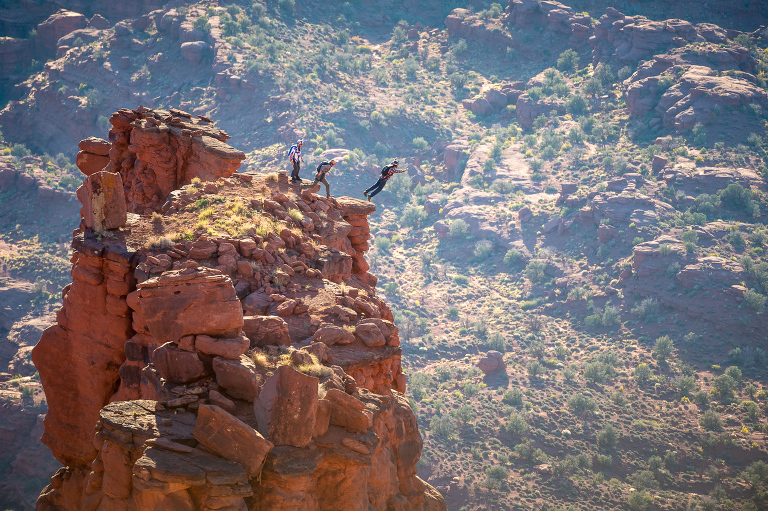 During the shoot, Andy Lewis made a successful attempt to jump off the top of a nearby mesa and land on top of the Kingfisher Tower. After repacking his parachute on top of the Kingfisher, he then B.A.S.E. jumped off it. This is only the second time anyone has ever landed on the Kingfisher Tower and it is was quite a small landing zone with an extremely high risk factor if anything went wrong. Andy ended up landing on the smallest part of the tower’s summit, which was about four feet wide. His feet were right on the edge of the cliff when he touched down and luckily his parachute continued forward, pulling him farther onto the top of the tower. In the image below you can see Andy zeroing in on the landing. 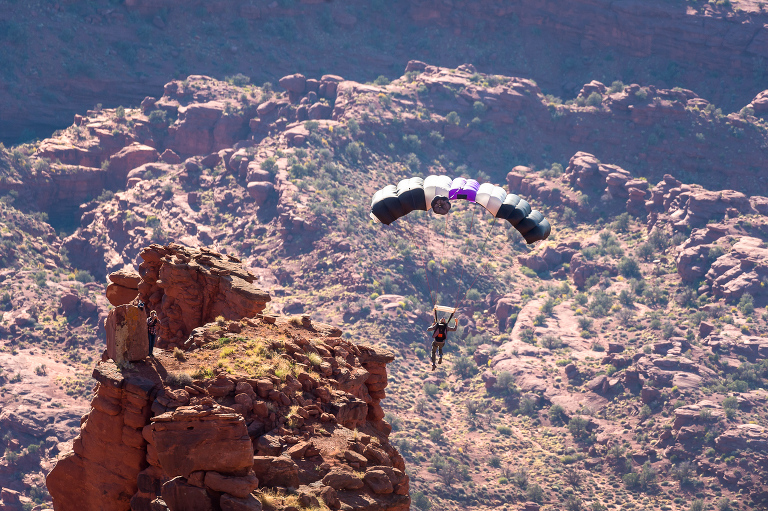 On the second day Miles Daisher, always one to push the envelope, did a wingsuit B.A.S.E. jump off the Titan. As you can see below, he didn’t just jump off it, he did a full gainer (backflip) off the exit and flew into a nearby canyon. For this shot I was stationed on a rib of the Titan with a 400mm lens and blasted away at 11 frames per second to create this composite image showing his movement. In the shot below (left) you can also see Miles ascending a fixed rope en route to the top of the Titan. 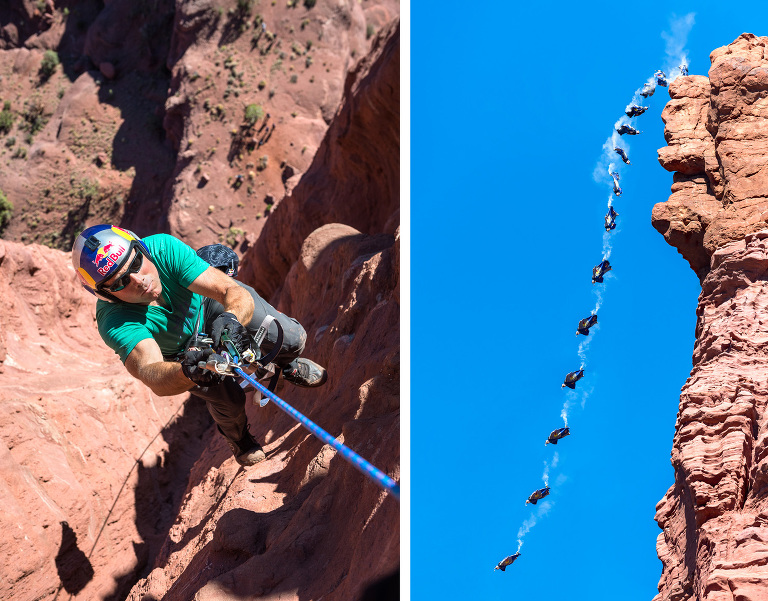 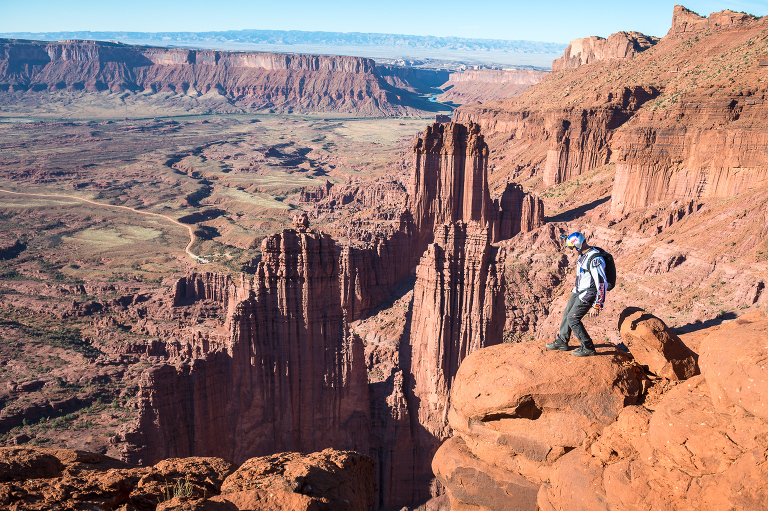 Above: Miles Daisher checks out an alternate take off spot on top of the Titan. Below: Miles Daisher launching from the Titan near sunset after climbing up the fixed lines. 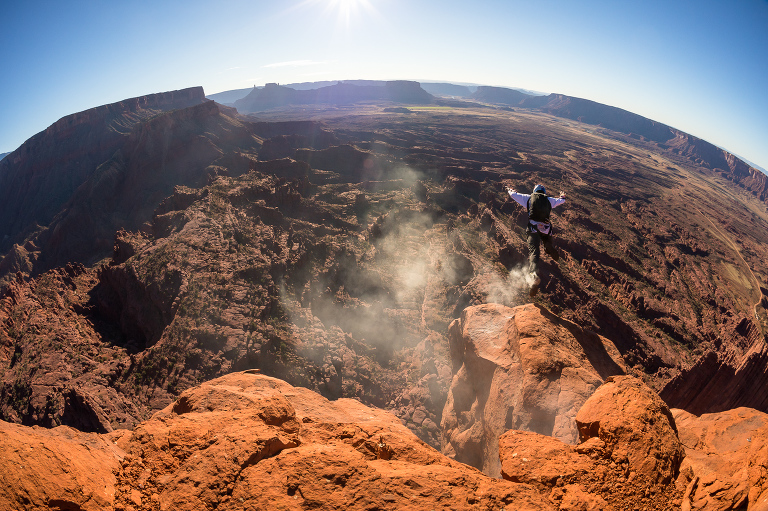 For part of this shoot I was stationed up high above the towers with a 200-400mm lens and a big tripod. As always, when working with a video crew it is a partnership where we try to stay out of each others way. As a climber, I was often in places that the video crew wasn’t willing or able to access. In the image below, I am situated above the Kingfisher Tower setting up the shot for Andy and Miles’ attempt to land on top of the Kingfisher. 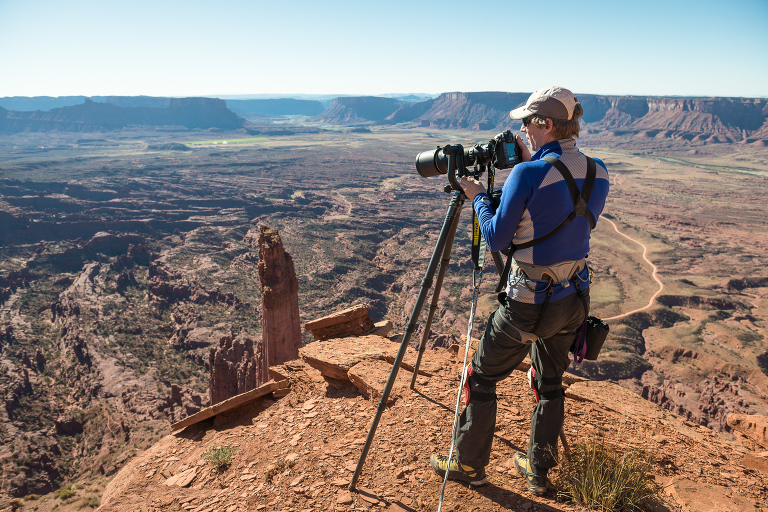 As with many of my photo shoots, it is hard to tell the complete story in a short blog. This shoot was incredibly taxing and difficult, as are all B.A.S.E. jumping shoots. You generally have only a second or two to catch all the action before the jumpers are just a dot in the sky below you. In the case of this shoot, ascending close to a 1,000-feet to get to the top of the Titan was a four hour ordeal that took it’s toll physically as well. As always when shooting with the Red Bull Air Force, and especially with Miles, whose passion is effusive, there is never a dull moment and I relish the time I get to spend with them. Look for a full accounting and more images from this incredible assignment in my forthcoming Winter 2015 Newsletter.