Without a doubt, Instagram is one of the most exciting social media platforms anywhere. It is now ranked the number two most active social media platform (by number of users), just behind Facebook, with over 600 million participants. As a photographer, who has been slowing building a following on Instagram over the last three years, I have a love-hate relationship with the app. “Hate” might be a bit of a strong word choice in that last statement but you get the point. Trust me, I spend way too much time on Instagram. They have me hooked. On the one hand, it is inspiring to see an incredible number of amazing images on my Instagram feed each day. I tend to follow a lot of my fellow pro photographers, who post some top-notch images. In addition, there are a large number of amateur photographers creating incredible work, and in some cases their images are better than a lot of pro photographers.

I will parse my words here carefully as many might take issue with that last statement and I don’t want to sound like a whining voice, moaning about my lack of followers. I know among pro photographers, who are a pretty discerning bunch, that quite a few of us have realized this fact. That fact being that our best images rarely get as many likes as our B-grade images, which are some times tailored just for Instagram. My best images, those that are the best I have ever created in 20 years of working as a full time pro, always seem to get less likes than an average image with some fancy lighting or a landscape reflection in a lake.

As an example, below are two of my images that were posted to my account @michaelclarkphoto. The left image is a cool image of a windsurfer, which was shot from a helicopter. It is a decent image, and an interesting perspective, but by no means is it out of this world incredible. On the right is one of the best images I have ever produced. It is an image that draws you in and forces you to look hard, and the lighting in this image took years to develop. Yet, the far superior ice climbing image got less than half the number of likes as the windsurfing image. This is but one example, but I have seen this over and over, not just on my own account but on other major Instagram accounts that I post to. On other accounts, I have regularly seen my best images get 1/5th the number of likes as some of my more pedestrian images have. I have also seen world famous photographers post “once-in-a-lifetime” images that barely get a yawn, but the next image posted of a Lilly pond gets more than twice as many likes. That begs the question, “What is going on here?” 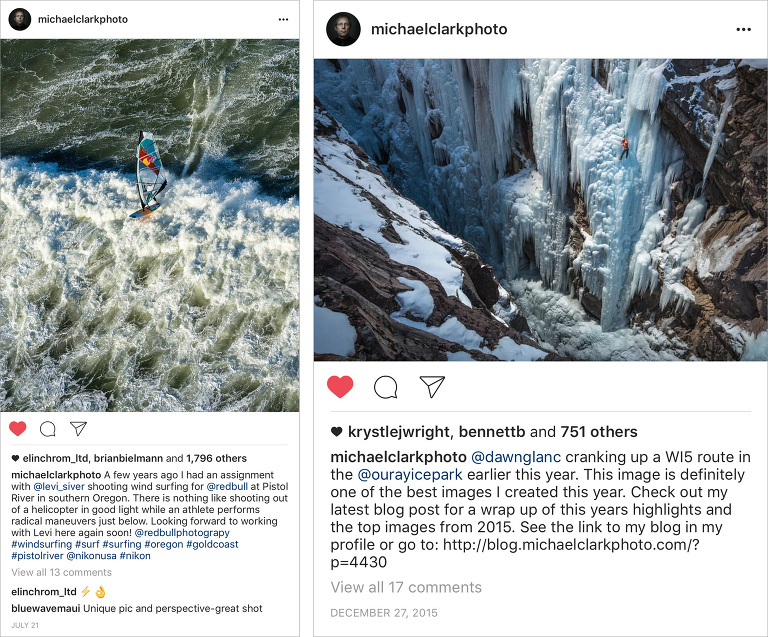 The answer, I believe, is that the masses are not necessarily as educated about photography as industry insiders are. I’m pretty sure that isn’t really a shocking statement to anyone. I would hope that photo editors, ad agency art buyers and professional photographers who have spent years and years in the industry critiquing, editing and pursuing top-notch imagery would have greater experience judging imagery than the average consumer.

In many ways, this emphasis on entertaining the masses with an-image-a-day is in some ways promoting mediocrity in the photography industry. I know that is a huge statement. Let me explain. Instagram is driving a lot of advertising these days–much more than the average consumer probably has any idea about. I have lost assignments and sponsors because my social media stats weren’t big enough–i.e. I didn’t have enough followers. That is totally fine. I get it. If a company wants to spread the word far and wide then they need to go with someone who has the megaphone and can do just what they want–or help to increase the spread of that companies advertisements beyond the companies’ followers. These days, there are quite a few photographers (and non-photographers) on Instagram with significantly larger followings than the companies they are promoting. [Kudos to those photographers!] Amazingly, some of the best photographers to ever pick up a camera have a ridiculously small number of followers.

There is actually a pretty clear formula as to which images get the most likes on Instagram. Create images that are nicely composed and exposed, which allow the viewer to escape in that image and you will have a winner. A few examples of those types of images are: place a small figure in a large and compelling landscape, create a unique and stunning landscape image of an exotic location, use dramatic lighting to make an image pop off the feed, put up a hammock in an unusual place with a stunning background, shine a headlamp up into a night sky with a little aurora borealis in the background, and finaly post those images often. Of course, some of these are age old image styles while others are new “Instagram” style images. The reality is the first time you saw an image of a dude standing there under a star lit night sky shining their headlamp straight up into it, you have to admit, that was a pretty stinking cool image. Just like songs on the radio that get stale after being played too many times, everyone copied the original and we are now officially over it–though those images still get a ton of likes.

So, what is the upshot here? I still love checking my Instagram feed and seeing what my friends and my peers are up to. The app is fun and easy to use, which is why it is so appealing. Do I wish my following was bigger than it currently is? Yes, of course. I am working on that. I also realize that the number of followers I have is growing quickly because I am allowed to post on some other much bigger Instagram accounts and because I get shout outs here and there. But no matter how many followers I have, I look to my own experience as a photographer, and to art buyers and photo editors that see thousands of images each year, to help me decipher which are my best images. The upshot is that photographers should not judge their best images by the number of likes they get on Instagram.

I realize this sounds like a giant rant on Instagram. If I had a million followers perhaps I would think differently about Instagram, but I know a few photographers with a million or more followers who are realistic about Instagram and have said similar things as posted here. Don’t get me wrong, Instagram is a great tool for marketing as well as for sharing images and communicating. But, it is my hope that those looking for photographers to promote their brand look at more than just the number of followers.